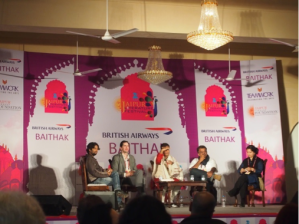 A look back on the “Woodstock, Live 8, and Ibiza” of world literature

“The Jaipur Literature Festival, which just hosted its tenth edition, has been called “the Woodstock, Live 8 and Ibiza of world literature, with an ambience that can best be described as James Joyce meets Monsoon Wedding.” In 2013, over a quarter of a million footfalls were recorded, with 2014 promising even higher numbers. Travelling to the JLF this year (my third festival visit) from Kathmandu on a work-related trip, I attended days two, three and four. The full programme, over the course of five days, featured over 200 sessions in six venues. This year’s poor weather may have dampened things (quite literally) thanks to chilly thunderstorms throughout north-western India on day five and cold temperatures and fog on the other days—but the uncomfortably large crowds continued to congregate, turning the Diggi Palace grounds into something akin to Tokyo’s Shinjuku train station during rush hour.”

Read the rest at the Asymptote blog.

One thought on “Dispatch from JLF on Asymptote blog”