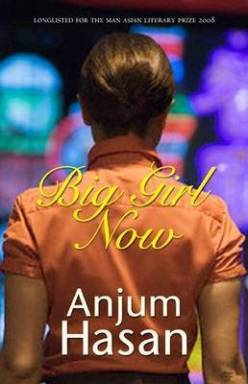 I first encountered Anjum Hasan through her story in Zubaan’s 2007 collection of young, female Indian writers’ work, 21 Under 40: New Stories for a New Generation. In a generally impressive anthology, Hasan’s “Like a Scene from All Those Movies” is certainly a standout, reflecting on the different, often contradictory pulls that young, educated Indians are facing at the present-tradition, westernisation, the lure of the big city. Her introspective, slightly cynical tone appealed to me, and when I was in India last I saw her speak at the Jaipur Literature Festival and picked up a copy of her first novel, Lunatic in My Head. Big Girl Now is (the Australian title of) a sort of sequel to that first novel, the genesis of which can be clearly seen in that earlier story, “Like a Scene from All Those Movies”. It identifies Hasan as one of the most promising, unique and attractive of contemporary Indian writers (along with Githa Hariharan, I would say, though she is a generation older than Hasan, and has been active for quite some time).

I said that Big Girl Now is the Australian title of this book, because it was originally published in India with the title Neti, Neti (which, I believe, suggests something like “not this, not this”). Published by Brass Monkey Books, a Melbourne-based imprint that has recently set about making more high quality Indian literature available to Australian and New Zealand readers. They were absolutely right in identifying Hasan as one worthy of a larger audience, but I don’t think they have done the book any favours with their packaging. If I hadn’t already been a fan of Hasan’s, I certainly wouldn’t have picked this book up in a bookshop (the old adage of not judging a book by its cover should be true, but who can honestly say that they don’t?) The title, for one, is banal, and unless one has read Lunatic in My Head and is already familiar with the central character Sophie Das (who, in the first novel, is an eight year old girl, and in this is a twenty-five year old woman), could lead the reader to believe that this is some type of romance. I understand that the original title (Neti, Neti) was probably not marketable to a non-Indian audience, but if marketing was such a concern, Big Girl Now doesn’t seem like an ideal title.

But that gripe is extra-literary, and should not detract from the fact that this is a wonderful book. Hasan’s protagonist, Sophie, is a bit of an odd-ball, but the reader is thrown so thoroughly into her world that we entirely empathise with her neuroses, obsessions and self-destructive trains of thought. Sophie is from Shillong in India’s Northeast, and, having failed to win a scholarship to study in America (every young character’s dream) that she thought she wanted because her father wanted it for her, moved to Bangalore. Like so many other young, educated Indians with limited prospects in their small-town homes, she works in a Business Process Outsourcing company (BPO), transcribing subtitles for western movies. She is neither satisfied nor dissatisfied with her job, her eclectic and eccentric group of friends, or her boyfriend, Swami. This ennui is finally shattered when one of her friends brutally murders his girlfriend, and Sophie travels back to her small-town home to seek the balance she feels is missing from her life. Of course, the answers cannot be found in Shillong, with life and relationships there being just as messy as in the metropolis.

Underlying the chain of events in Sophie’s life is the question of what it means to be a young Indian at this moment in time, with the pull of roots and the potentiality of rootlessness. But more than this, it is about being an outsider in the place where one is encouraged to believe one belongs. Like Hasan herself, Sophie and her family are considered “settlers” in the Northeast, not belonging to a “native” tribe, but not really belonging anywhere else, either. Sophie considers Shillong home, but her parents do not, and neither do the indigenous inhabitants of the area. She ponders:

“Maybe it was the weed, but the word “India” lodged itself in Sophie’s brain. Somewhere in the depths of her childhood she had formed the idea that India was an exact feeling, a fixed series of things in contrast to everything else in her environment which was simply what it was and had no relation to India. […] The little flags with their dripping orange and green watercolours, which she and her sister used to laboriously paint when they were little, were self-evidently India. […] At school, the girls who oiled their hair and worried about exams reeked of India, as against those who wore their skirts short and who, already at thirteen or twelve, understood the mysterious workings of sex.” (page. 128)

These themes run through all of Hasan’s work, with varying emphasis on the periphery, the metropolitan centre, or the sought-after, elusive and fleeting mirage of the west. The wry, cynical but strangely hopeful final sentence of Big Girl Now (and I don’t think I give anything much away here) suggests that Sophie’s story may not be at an end just yet: “The only problem we’ll have in life from now on is the problem of where to find parking space.”